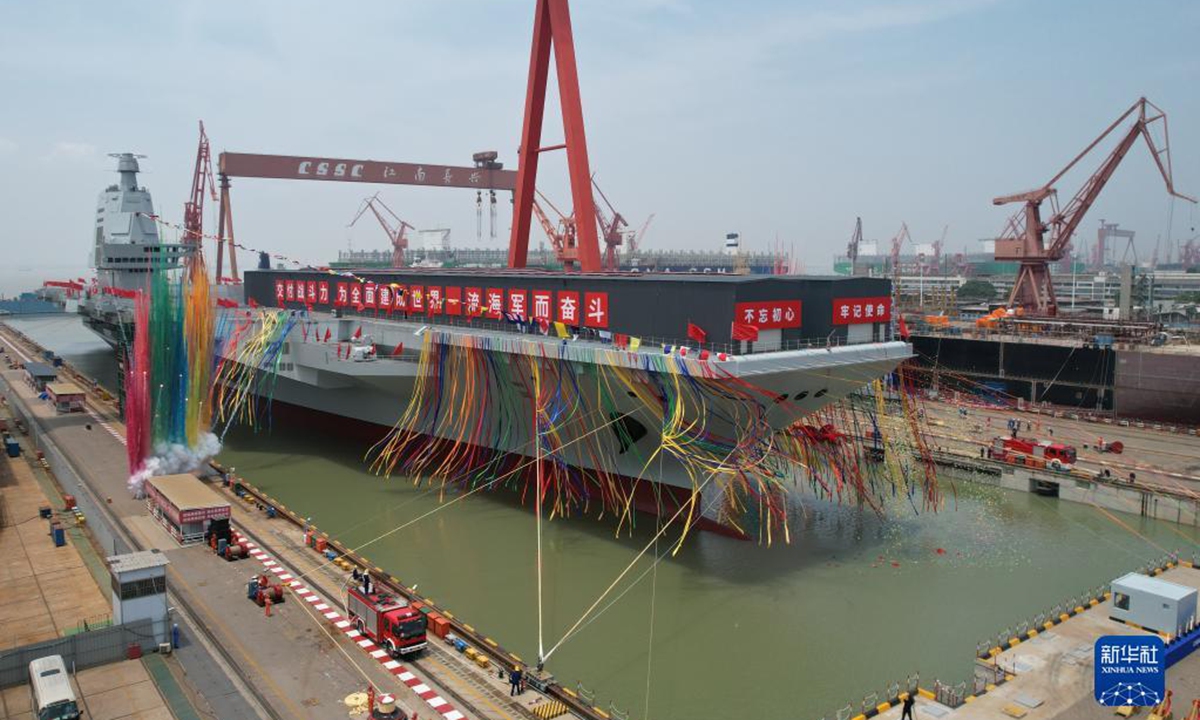 China's own designed carrier. Notice it does not have one of those stupid "ski jumps". Those limited the amount of weapons and fuel their fighters could carry.

No, this one has three electromagnetic catapults. And unlike the Gerald Ford's catapults.. which run on AC power... the Type 003 uses HVDC (high voltage DC).

The catapults are covered in the pics.

charliemeyer007 said:
How many coal burning boiler's?
Click to expand...

I'm guessing it was designed with stolen American technology no doubt!
Click to expand...

It's a carrier, dude. Of course it will look like other carriers.

And as I pointed out, it has some tech that US carriers don't have.

cowboy1964 said:
I thought such massive surface ships were idiotic
Click to expand...

Please tell the US Navy you think they are idiots.

Skynet17 said:
Is there anything the ChiComs WON'T copy?
Click to expand...

At the level of an aircraft carrier, copying will actually be counter-productive. It's much better to make your own.

China's first carrier is a modified Russian heavy cruiser turned into a carrier. Their second is an improvement on that but still derived from that design. They are not happy with those carriers because they don't have a catapult.

That means their planes can only take off with half their weapons and half the fuel. The J-15 is the largest plane to be a used on a carrier anyway... it's big and heavy.

It was a no brainier to make a carrier WITH catapults. And they did not copy the US Navy's steam catapults. These are electric.
R

When underwater oil rigs and underwater mountains are finished and done with, I am sure they will get on with finding and targeting Chinese carriers.

jaxenro said:
And is existing Russo/Chinese technology
Click to expand...

There is no Russo/Chinese hypersonic tech. There is either Chinese or Russian. They are not sharing.


jaxenro said:
Can a hypersonic missile be defeated by a layered defense system?
Click to expand...

jaxenro said:
so in your considered opinion are aircraft carriers now just expensive targets or still viable?
Click to expand...

Depends on who is using them and against whom.

USA was giving us a giant cruiser size ship, very cheap. We could've put our own choice of weapons on it and made it awesome. But we declined the offer. Because that would've been our largest boat and if something happened to it during war, the whole navy would be demoralized.

So according to our navy, big boats.. specially carriers, are expensive targets.

In all our wars with India, they hide their carrier in Bombay harbor so we can't use our subs to torpedo it.

So in the view of the Indian navy also, a carrier is an expensive target.

I don't even know what stupidity they are suffering from, sailing carriers when they and their enemy (us) share a long land border.

On the other hand, US Navy and Chinese Navy are obsessed with carriers. These are large navies with lots of money and they sail "carrier flotillas". Like the Americans have like 2 attack submarines, a cruiser or two, etc with their carrier. That is a lethal combination.

The Chinese carriers... at least the ones before this one... are next to useless when compared to American super-carriers. However, they have Renhai Class cruisers and Type 52 destroyers escorting those carriers. That is also a lethal combination.

Consider a scenario where USA needs to teach Iran a lesson. And nobody gives you a base to operate from.

Well, two carrier groups can finish Iran with plenty of firepower left over. So, they give you many options. And the side with more options is the one that wins.
R

bcvojak said:
I always thought 3X as many smaller carriers would be better. . .
Click to expand...

The Royal Navy had those but now their new carriers are a lot larger. So they figured larger is better.

Bajatacoma said:
The J-15 is currently the only fighter aircraft they're operating off their carriers
Click to expand...

It's a Flanker with folding wings. And Flankers are huge.... not suitable for carriers at all.


Bajatacoma said:
but the J-20 is supposed to be able to
Click to expand...


Bajatacoma said:
The Soviet designed but Chinese built engines on their aircraft are maintenance intensive.
Click to expand...

Which is why they have started dumping those.
R

Scoggin said:
it shows Chinese weakness in military strategy… any military think tank knows carriers are obsolete in all out modern warfare
Click to expand...

Why are you wasting money on making more then?
R

Bajatacoma said:
I know they have been working on new engines
Click to expand...

They have installed them.

Nobody on earth wants to deal with Russian hardware if they can avoid it.

Our own planes are getting Chinese engines. On average they last half as long before they need an overhaul compared to American engines but then it's the same story with Russian engines.

However, the Chinese engines have higher thrust and they are improving with every iteration... unlike Russian ones.


Bajatacoma said:
I thought they'd announced the J-20 was going to be adapted for use on the new larger carriers since it was already in production while they worked on a carrier based J-31?
Click to expand...

Scoggin said:
Also reminds me of the Buran… the entire world wants to imitate us… but imitations are cheap
Click to expand...

Buran was actually more functional in design than the American shuttle... which proved itself to be nothing more than an expensive death trap.


Scoggin said:
Because you need a big speed bump before going nuclear.
Click to expand...

So they are giving themselves the same options. And it seems you don't like them doing that.
R

Scoggin said:
but until you honor the men
Click to expand...

There is no honor in killing your own people with shoddy engineering.

Now we are done.
R

US carriers use steam catapults.

The first carrier to use electric catapults is the Ford. And it's not as reliable as the steam catapult... it glitches after every few dozen launches.

The difference between American catapults and Chinese ones is that the American system is based on AC while the Chinese use HVDC. Chinese say, their system is better and is more reliable.

There is no way to tell right now if they are better. We will know the answer after it is deployed and info leaks. Maybe in a year or two.
R

To some extent I agree with you. I hope my navy never goes for a carrier... NEVER. It would be stupid.

We, on the other hand, have no desire to be any kind of World Cop. Even if we had the power and money... no. Nothing good comes out of it. I think most normal countries realize that.
R

ttkciar said:
To be fair, the
Click to expand...

There is a missing post number and it seems you are talking to someone I have put on ignore.... ??? The only one I've done that to in this thread was some annoyed chap calling himself MOOOA or something...


ttkciar said:
their engineers have some solid experience with tank technology.
Click to expand...

And aircraft, and ships, and submarines, and long range missiles. and nukes, and....


ttkciar said:
They did it on time and on budget,
Click to expand...

Almost always. That's how you can tell it's good engineering.
R

Scoggin said:
and are in China’s pocket
Click to expand...


Scoggin said:
having the Chinese run your facilities
Click to expand...

We run our own facilities, thank you.

And I just noticed... you've got just 14 posts here. Which means you are using me to boost your post count by wiping your hands on my towel.

Putting you on permanent ignore as well. Thanks for playing, mate.
R

Rocky Mountain Beer Man said:
Better to have smaller, more nimble ships with less of a signature.
Click to expand...

Exactly what our navy thinks.

We just inducted a new class of carrier-killer boats. This was the first one... it's sister ship sailed yesterday. More to come:


ForumSurvivalist said:
Put me on a Cigarette Craft with a nuke and I'll drive right into that Chinese aircraft carrier while it is at the dock.
Click to expand...

You do have the right idea... we figure small heavily armed boats make good carrier killers. Submarines and aircraft work even better.