The US Forest Service went into an area of the Jemez Mountains in North Central New Mexico (Sandoval County) to start a prescribed burn.
The Forest Service had been heavily politicized by that point by the Clinton Administration and despite repeated warnings and clear opposition, the FS started a "controlled Burn" that would last for 2 months and burn over 43,000 acres. 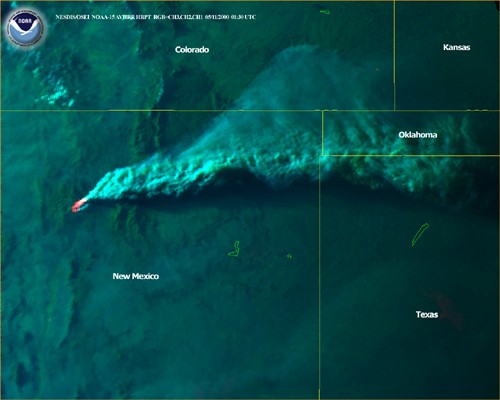 A re-examination of forest-fire prevention techniques was already in progress at the time of the Cerro Grande Fire and received added impetus from the damage the fire inflicted. The far larger Rodeo-Chediski Fire in Arizona, as well as several other fires in the Western United States in 2002, completed the process of bringing forest fires into political focus, leading to the establishment of the Healthy Forests Initiative in 2003. This initiative remains controversial, and its applicability to the relatively sparse forests of the Jemez Mountains that were consumed in the Cerro Grande Fire is unclear. Clearly, though, significant thinning of the coniferous forest of the Jemez has occurred in the years following Cerro Grande.

There were suppose to be wide and massive changes inside the decision making of the FS to prevent this from happening again...

Almost 22 years to the month of Cerro Grande, The US Forest Service started a controlled burn in the Sangre de Christo Mountains east of Santa Fe, near Pecos, Las Vegas and Mora.
Again, DISPITE the warnings from many, wind advisories from the US Weather Service and a goodly portion of others who openly criticized it, ignited a "controlled burn" labeled "Las Dispensas " near Hermit's Peak. The fire quickly spread out of control with winds gusting up to 25 mph (low in comparison to the 60+ mph winds we can get).

During a May 3 news briefing on the Calf Canyon/Hermits Peak Fire, Governor of New Mexico Michelle Lujan Grisham said the federal government needed to be held accountable for the wildfire, saying "We should expect restitution and direct investment from the feds."[23] Grisham also signaled a desire for broader policy changes surrounding prescribed burns, declaring in the same May 3 news briefing that "New Mexico is going to work diligently to make sure the feds have a whole new set of rules that keep us safer."[24] This comes as the Biden administration has laid out plans to increase controlled burns, among forest thinning and other tactics, as part of a 50-billion-dollar program to lessen wildfire danger.[25]

Governor Grisham also referenced the 2000 Cerro Grande Fire, which was likewise the result of an escaped prescribed burn conducted by federal personnel and also destroyed hundreds of structures.[26] Tom Ribe, a New Mexico author and environmental conservation advocate who wrote the book Inferno by Committee: A History of the Cerro Grande Fire, argued that it had been a poor decision to begin the prescribed burn that became the Hermits Peak Fire, given the frequent windy conditions during spring in the region, as well as the ongoing drought.

The cause of the Calf Canyon fire is still unknown, but there is rumor that the winds carried embers from Hermit's Peak to the ignition point of Calf Canyon.
On April 22nd, 2022, the two fires merged and has to the day of this posting consumed over 203,920 acres making it currently the second largest fire in NM history.

the image below covers an area of approximately 6600 sq. miles. hermit's Peak covers approx. 318 sq miles of that.

What is so frustrating is that DISPITE the lessons "learned" from Cerro Grande, the FS moved forward with this action.

At a time of sever situations from the "plandimic" to masking, to shutdowns, to Russia Ukraine, to shortages, food issues, severe drought, high winds and shortage of man power, the FS STILL went forward with this decision.

This is not only "man made disasters at work, but it outright evil and deliberate incompetence!


here is your proof.
M

Joined Mar 3, 2021
·
127 Posts
I live in southwest Colorado and on Saturday I drove from Albuquerque to my home in Pagosa Springs, Colorado. The sky was choked with smoke mostly from the Cerro Palado fire burning to the west of Santa Fe. The winds in our area have been ferocious gusting to more than 45 mph for the last two weeks. The notion that anyone should start a "Control Burn" is blatant stupidity. In this part of the country we don't worry about hurricaines, tornados, or earthquakes. Our local variety of "natural" disaster is forest fires. It really doesn't help when the FS decides to create its own infernos. They get out of control more often than you'd like to think.

The "cloud you see in the distance is the smoke plume from the fire. That plume is over 65 miles away. The elevation of the top of that plume is approximately 30,000 feet.

soocom1 said:
At a time of sever situations from the "plandimic" to masking, to shutdowns, to Russia Ukraine, to shortages, food issues, severe drought, high winds and shortage of man power, the FS STILL went forward with this decision.
Click to expand...

Where's the greenies? Shouldn't they be howling about all the CO2 being released by BURNING trees in which all that carbon is locked up? I thought o-biden was worried about climate change but instead is burning unknown TONS of oxygen producing and carbon dioxide absorbing trees. It's okay for them to go up in smoke but God forbid anybody log them and build houses with them while STILL keeping that dastardly carbon locked up.

Joined Sep 10, 2012
·
1,818 Posts
The forest service is doing prescribed burns in the Jefferson National Forest close to me here in Va, Really makes no sense as this area already had a wildfire less than 10 years ago, and there's nothing around it. So basically they burned a 500 acre swath up a mountain from a hi way to the Blue Ridge Parkway.
J

None of your business.
Joined Jul 22, 2013
·
3,607 Posts
The feds are taking the Scorched Earth approach to a new level...Just like back in the buffalo days, where US Army decimated the beast so that Indians would starve to death in the coming winters...This is no different as this impacts farming, hunting and ranchers. Calling it 'prescribed burning' even after a mountain of warnings and data going against it.

What a bunch of Buffoons the Feds are.

there is only one way to end this.

Joined 6 mo ago
·
401 Posts
I've had generally good interactions with the US Forest Service. They have mild interest in our woods and creek and have been very helpful with answering questions, assessing wildlife, etc. That said; I'm not confident that even their PhD biologist is any smarter than me in restoring our creek and woods to pre-1890's condition.

One point of contention: They are recommending a controlled burn and large-scale culling of trees in order to make a good portion of the property an "oak Savannah". After viewing some of their completed projects as well as some of their misadventures with fire, I'm more inclined to do things on my own.

A.J. said:
I've had generally good interactions with the US Forest Service. They have mild interest in our woods and creek and have been very helpful with answering questions, assessing wildlife, etc. That said; I'm not confident that even their PhD biologist is any smarter than me in restoring our creek and woods to pre-1890's condition.

One point of contention: They are recommending a controlled burn and large-scale culling of trees in order to make a good portion of the property an "oak Savannah". After viewing some of their completed projects as well as some of their misadventures with fire, I'm more inclined to do things on my own.
Click to expand...

I've done well with the forest service to, they helped saved my farm from burning a few years back. But I did have one forester come and ask me if the could harvest all the scrub box elders on my ridgeline. I told them I didn't have box elders on the ridgeline, though they do grow on the fence line. I keep that cleaned out the best I can though. He got all indignant and wanted to show me all the box elders I had growing on the ridgeline, so we jumped in the kawasaki mule and drove up my ridgeline. He pointed at the sugar maples and said those where garbage box elders. I was like "no, those are sugar maples. My great grandfather helped plant them." He went up and looked at a tree, got out his phone and googled it, then came back and said, "You're right. Google says they're sugar maples." He had to GOOGLE a tree to find out what it is. I casually said that I do a couple tree ID classes out of the community center every year if he wanted to learn how to ID trees. All I kept thinking was that this guy gets paid $80,000 a year to be a forester and he doesn't know the difference between a sugar maple and a box elder tree. Dang!
1 - 13 of 13 Posts
Join the discussion
Continue with Facebook
Continue with Google
or sign up with email
About this Discussion
12 Replies
9 Participants
Last post:
Fen Boskage77 13 d ago
Survivalist Forum
A forum community dedicated to survivalists and enthusiasts. Come join the discussion about collections, gear, DIY projects, hobbies, reviews, accessories, classifieds, and more!
Full Forum Listing
Explore Our Forums
General Discussion Disaster Preparedness General Discussion Firearms General Discussion New Member Introduction Wilderness Survival, Hiking and Camping Forum
Recommended Communities